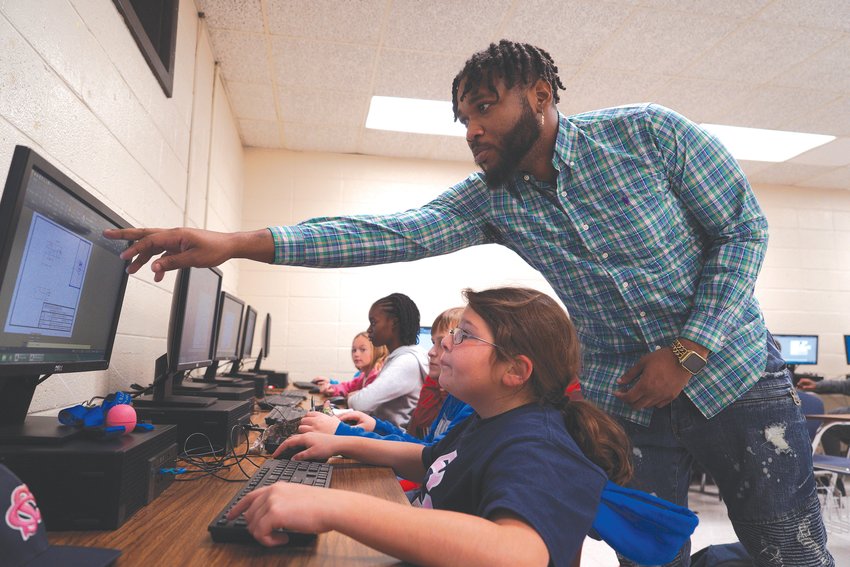 Four years ago, Bates Middle School offered the same handful of electives – physical education, band, art and keyboarding – that you could find in a school a generation ago.

As Principal Ayesha Hunter describes it, by now tapping into the skills and talents of its teachers and using community partners, the Sumter School District school offers 40 electives with a focus on 21st-century skills.

For all that hard work, a leading educational certification group recognized Bates last week as a nationally certified STEM-accredited school. It’s the second district school to earn the national accreditation for its curriculum focus on science, technology, engineering and math – Alice Drive Middle is the other.

Hunter and her STEM faculty team sat down and discussed the four-year journey on Wednesday.

To be nationally recognized with the certification, schools have to show evidence they are meeting 11 STEM standards across categories for students, teachers/administrators and experiences.
Hunter and teachers said transitioning from a traditional school to a STEM school involves a “mindset change.”

There’s a general change in teaching style, where the teacher becomes more of a facilitator, students are given goals, and the class is more student-led. Students generally sit in groups to increase collaboration and work on projects involving problem-solving.

Examples of some of the electives include digital multimedia, AutoCAD/robotics, financial literacy, character education, Advancement Via Individual Determination and biomedicine.

Those electives result in “authentic experiences” for students who often can’t be successful in a traditional classroom setting, according to eighth-grade science teacher Tiffany Green.

“When students are working on projects, they are not going to sit isolated from each other,” Green said. “They are going to be working in groups and collaborating.”

She said, given technology advances, students often work on laptops, and teachers across different subjects can work collaboratively on the same shared documents.

Seventh-grader Kevin Gordon had 91 slides with characters from a Dragon Ball Z battle. He said TV shows and movies got him interested in animation.

Dalton Williams, 11, said when he grows up he thinks he would like to make robots.

“Robots are really powerful in everyday life because they can do things most humans can’t do,” Williams said. “They can be stronger than humans or even sometimes smarter if you program them correctly.”

Williams said he might want to become a Navy SEAL and invent naval weapons.