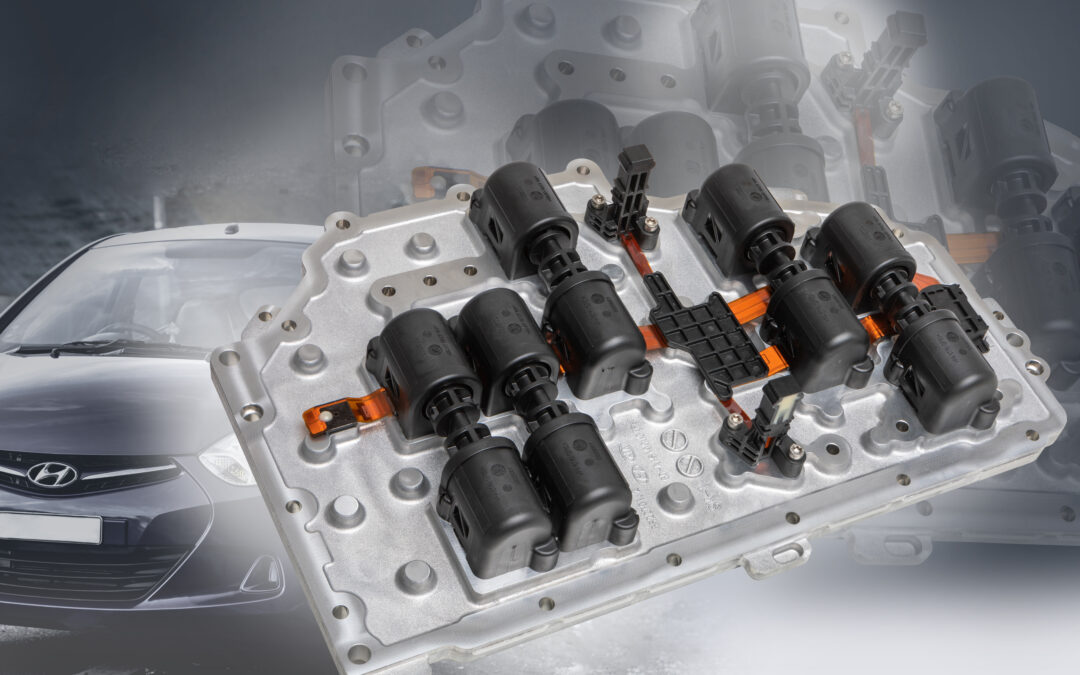 At the 20th SPE Automotive Award Night of the «Society of Plastics Engineers», EMS-GRIVORY was once again among the prize winners taking a total of four awards! This year again, innovative applications made using EMS high-performance polymers were nominated in various categories and received several awards.

At the 20th SPE Award Night on August 5, 2021 in Dusseldorf/Neuss (Germany), the Society of Plastics Engineers again presented their coveted awards for the most innovative polymer applications in the automotive industry. Four applications using EMS materials received one of these highly prestigious awards.

The gear shift module with pistons and cylinders made of Grivory HTVS-5X1 and used in various Hyundai models, took second place in the category «Power Train». The hydraulic actuator unit controls gear changes in eight-gear, double-clutch gear systems. The modular design with many non-variable parts allows economic manufacturing of the single components and efficient end assembly. Grivory HTVS-5X1 is used for ten cylinders and five pistons in this design. Decisive for use of Grivory HTVS-5X1 are its excellent surface quality, very good dimensional stability, high bursting strength and high temperature resistance in hot oil.

Also taking second place was the innovative rapid charging system, where Swiss cable specialist Huber+Suhner relies on long-glass fiber products from EMS-GRIVORY for the main component. This prize was awarded in the category «Electronical/Optical Part». The extremely tough, long-glass fiber reinforced and flame protected high performance grade Grivory GVL-4H V0, provides high reliability of the rapid charging system in rough daily use for charging of electric vehicles. Also part of the rapid charging system is a liquid-cooled cable. Thanks to the active cooling process, this cable has a significantly smaller diameter than the throughput would make you believe and is, therefore, very easy to handle. The cooling lines in this cable are also made of an EMS material: Grilamid L.

The High Power Charging (HPC) developed by Huber+Suhner with up to 500 A and 1000 V, allows particularly rapid and, therefore, user-friendly charging times which no longer differ greatly from a filling time with liquid fuel – even batteries of larger electric vehicles can be recharged up to 80% in less than 15 minutes.

Third place in the category «Chassis Unit / Structural Component» was taken by a one-piece headlight bracket made of Grivory GVL-4H for Jaguar Land Rover. It allows weight savings of 45% to be achieved for this assembly and replaces the previously used bracket made of die cast aluminium, metal profiles and sheet metal components. As no post-treatment is required, manufacturing costs were also reduced by 30%. The one-piece injection-moulded part makes installation quicker and maintains its shape even during high-temperature painting processes at temperatures above 200°C. The high impact strength and energy absorption of Grivory GVL-4H make metal replacement possible for this crash-relevant component. Using rheological simulation calculations from EMS, the component was optimally modified for the designed construction space.

Multiway valve in cooling systems – Efficiency from a flexible configuration

Also awarded third place was the modular multiway valve from Vitesco Technologies. This is made using several EMS materials: The actuator housing of Grilon TSG-35/4, the valve housing of Grivory HT1V-3HY and the valve lid of Grivory HT1VA-4HY. Further parts, such as the valve spool are made of Grivory HT1V-3HY and the main gear wheel is made of Grivory HTV-4X1. The multiway valve makes various configurations possible with only minimal changes to the components. This allows flexible adjustment to suit the various requirements of different automotive manufacturers. In the case of design changes, the given technology remains to a significant part unchanged, reducing validation outlay and lowering system costs. The design convinces with its compactness; instead of two types of valve, the multiway value combines all functions in one component. Fewer pipelines, connectors, brackets and rapid connections are needed, allowing further cost savings to be achieved. 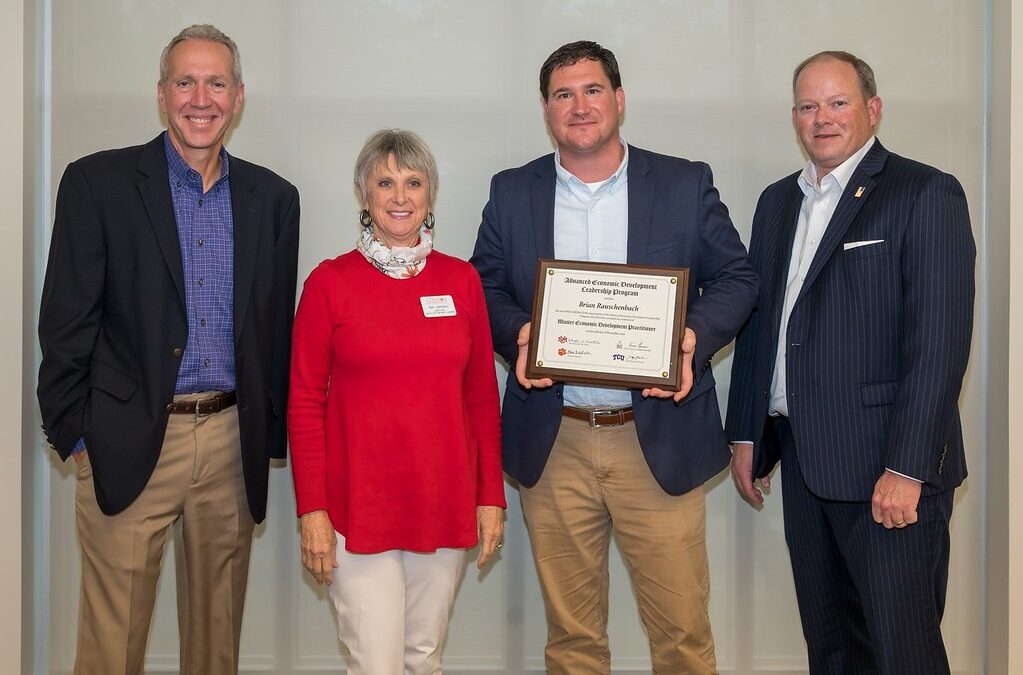 The Advanced Economic Development Leadership course accepts mid and senior-level practitioners from across the U.S. 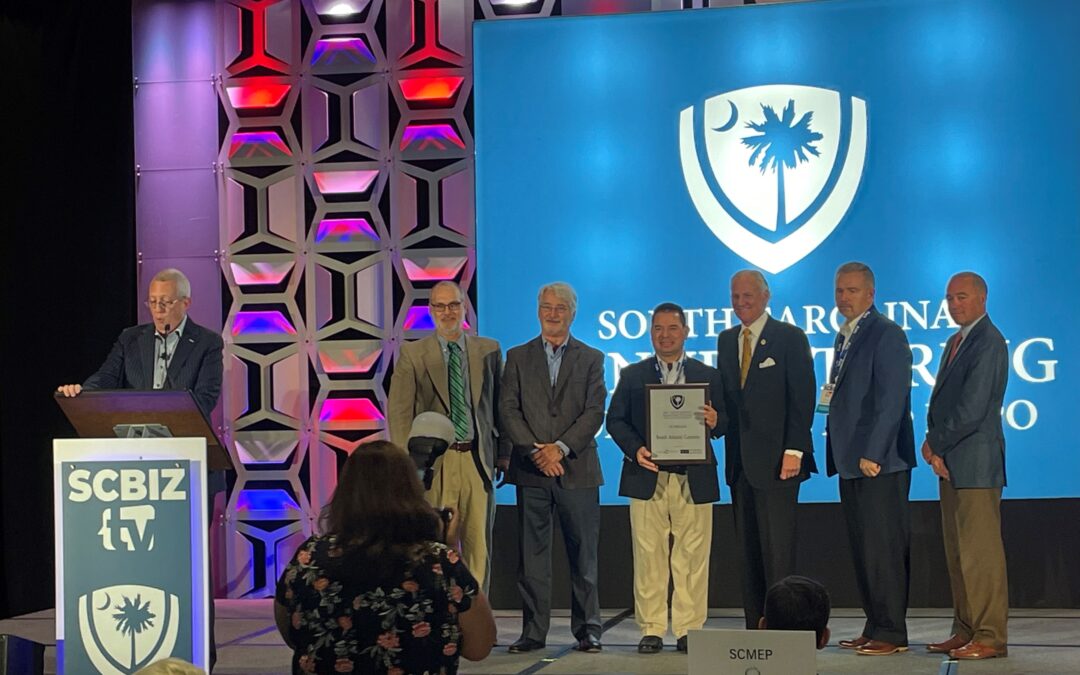 Two industries in TheLINK Region were recognized during the 2021 SC Manufacturing Conference and Expo in Greenville. The anchor event for the conference is the SC Manufacturing Extension Partnership Manufacturing Excellence Awards Luncheon that was held Friday, November 12th. Thirteen companies across the state received awards this year.

South Atlantic Canners in Bishopville received the Outreach Award for their community support and initiatives The stewardship program is the cornerstone of their purpose statement and over the past 10+ years they have been involved in and/or supported numerous community functions, environmental events, and youth education.

Santa Cruz Nutritionals received the Smart Move SC New Plant Award, highlighting the 2020 announcement to expand operations in Sumter County. The $84 million investment will create 164 new jobs. Established in 1968, SCN is a leading manufacturer of enhanced confectionery delivery systems. The company uses research and science to develop gummy vitamins such as calcium, fiber and other supplements for the functional food and nutraceutical markets.

“Our investments at the Sumter plant were made knowing that we could not be successful without a strong sense of community – both with our city and with our employees,” commented Steve Davis, Vice President of Operations, Santa Cruz Nutritionals, Sumter Plant. “The support that we have seen from both has been instrumental in our growth and I cannot be more excited about the future for Santa Cruz Nutritionals in Sumter and for all of our employees.”

Rauschenbach commented, “Santa Cruz Nutritional’s decision to locate, operate, and expand in Sumter, SC is the definition of an economic development success story. We take great pride in creating an environment where companies are successful in their business location and growth strategies which ● ● ● ●
leads to recurring capital investment and job creation for the company’s and region’s long-term success and sustainability.”

The South Carolina Manufacturing Extension Partnership (SCMEP) is a private, non-profit group that serves as a proven resource to South Carolina businesses, providing them with a range of innovative strategies and solutions. An affiliate of the National Institute of Standards and Technology (NIST), SCMEP operates under the US Department of Commerce to promote innovation and industrial competitiveness.
###