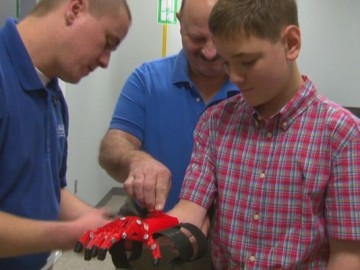 Sumter, SC (WLTX) –  At 13-years-old, Connor Morgan gave his mom a right-handed greeting for the first time as his father. Morgan was gifted with the 3D prosthetic from Central Carolina Technical College’s Engineering Graphics Technology program on Thursday.

“We take those things for granted,” said Morgan’s dad, Gary. “Every day when we get up and we’re able to do those sorts of things, but to see your son do it for the first time, as commonplace as it may be, it was kind of emotional.”

Morgan had no idea a middle-school trip to the college two weeks ago would end in him becoming the latest project for David Tuders and Rick Lavergne.

“I came here to learn about 3D printing and stuff, and they called me out and said they were working on my hand,” said Morgan.

“They had been been trying to get someone to do this for them for quite a while and when they asked us, we have never done anything like it,” said Lavergne. “We decided to take it on as a challenge and that’s what we took the project on, we wanted to help the young man.”

“It was a little daunting at first, but now that we’ve gotten through the process, we were happy with the challenge,” said Tudors, the program’s director. “It was an interesting challenge.”

It took a week for those with the program to print the pieces and assemble the hand. Yet it only took one moment for everyone in the room to realize their lives had changed.

“There’s always that, especially when you’re a teenager, of feeling different,” said Gary Morgan. “This gives him an opportunity to not feel so different and that’s satisfying, it’s very satisfying.”

“It was probably one of the greatest projects we’ve ever done,” said Lavergne.

The hand grasps as Morgan bends his wrist. Tudors says as Morgan’s wrist strengthens and gets used to the prosthetic, so will his grip